From Scandinavia to Silicon Valley

This is the story of a violin, crafted in 1938 by a violinmaker appointed by the Royal Court of Sweden; and in 1940 presented to a young Finnish boy, who was truly a prodigy, known as the “Little Paganini” of all Scandinavia.

The violin is now on loan to ECYS Concertmaster Young Hye Lee, and will be in her hands onstage at the Sibelius Celebration Concert on November 1 at Flint Center in Cupertino.

In 1933, after twelve long years of research, Swedish violinmaker Otto Sand announced that he had finally solved the secret by which Stradivarius obtained the excellent tone of his famous violins. Sand believed the key was in the lacquer, and that by means of a special kind of rosin obtained from Egypt, he had invented a lacquer of the same quality as that found on the ancient instruments.

Mr. Sand was also an active member of the Red Cross. During 1939-1940, the Finnish people were suffering greatly from “The Winter War,” a military conflict between the Soviet Union and Finland; it began with the Soviet invasion of Finland on 30 November 1939 (three months after the outbreak of World War II), and ended with the Moscow Peace Treaty on 13 March 1940.

In 1940, Otto Sand was appointed to the Swedish Royal Court “Kunglig Hovinstrumentmakare,” (Royal Luthier) which was a title in recognition of his ability. To bring pride and hope back to the Finish people, Mr. Sand bestowed upon their young talent the gift of a very special violin. 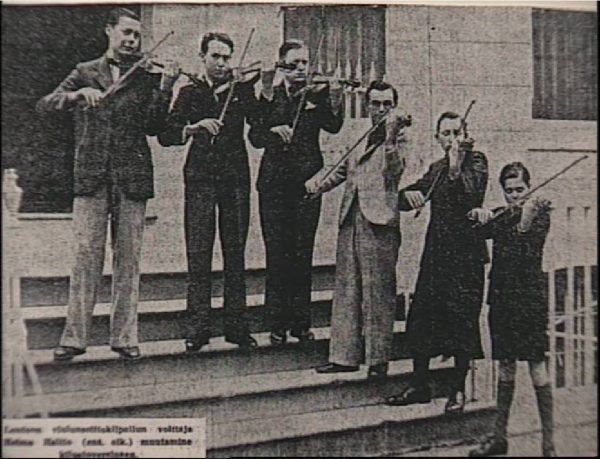 Heimo Haitto (farthest right) winner of the International Competition, with
other finalists. London, 1939

Heimo Haitto (farthest right) winner of the International Competition, with
other finalists. London, 1939 Heimo Haitto was born in Vyborg, Finland. At age nine he started studying the violin. Four short years later he debuted with the Helsinki Philharmonic Orchestra, and immediately won the attention of Finland. In May of that year, Heimo traveled to London to participate in the international competition of the British Council of Music. Although he was the youngest competitor at age 13, Heimo won the 1939 award.

In 1940, he appeared as soloist with the Stockholm Symphony and the Malmo and Oslo Philharmonic Orchestras. During the Winter War, Heimo came to the United States on a tour to benefit the Finnish Red Cross. Later he made his American debut with Eugene Ormandy and the Philadelphia Orchestra. Critics liked him and agreed that the predictions of Jean Sibelius, who was following Heimo’s career with great interest, had come true.

A Command Performance, whereupon the Violin is Presented to Heimo

As told by Dagmar E. Lundgren, the daughter of Otto Sand, in a letter from Stockholm in 1975: 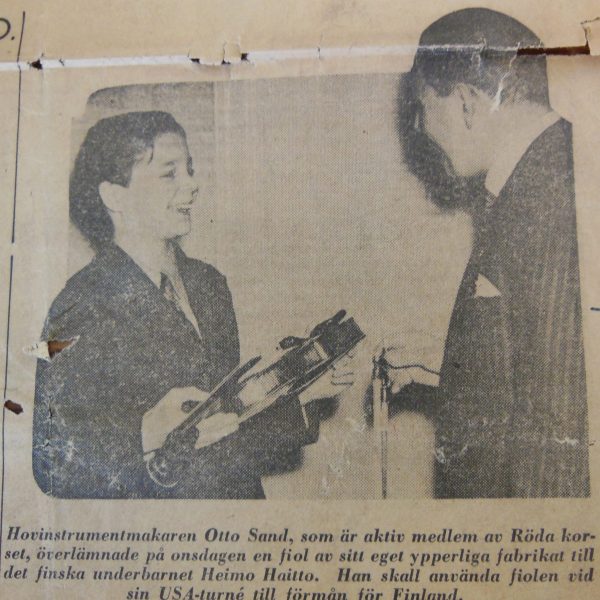 “I remember very well the occasion when my father gave the violin to Heimo Haitto. My father was a member of the Red Cross and by giving the violin to Heimo who at that time was going on a concert tour in USA to collect money for Finland, he in his way helped the Finnish people.”

The occasion was a command performance attended by the King of Sweden. From a newspaper caption:

“Mr. Otto Sand, the musical instrument maker by appointment of the Royal Court, who is an active member of the Red Cross, last Wednesday delivered a violin of his own superb make to the Finnish wonder child Heimo Haitto. He is going to use the violin on his benefit tour to the USA for Finland.” 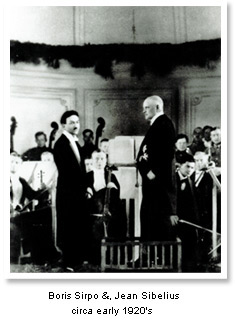 Early in his career, Sirpo was Assistant Conductor for Sibelius.

The violin has two labels. The first reads “Otto Gillis Sand, Stockholm Anno 1938.” The second label as follows: “To Finland’s Darling No. 1 and the little Paganini of all Scandinavia Heimo Haitto in memory of his friend Otto Sand, Stockholm, January 17, 1940. Soli Deo Gloria.”

From Finland to Hood River, Oregon

Early in his career, Sirpo was Assistant Conductor for Sibelius.Mr. Boris Sirpo (1893-1967) was Haimo’s foster father and teacher, a composer and a conductor who was a protégé of the great Finnish composer, Jean Sibelius. Sirpo was Russian-born but conducted and performed violin in Finland from early in his career.

After the benefit tour of the US, Haimo and his foster father settled in Hood River and then Portland, Oregon, benefitting from a program for Finnish war refugees created by US President Herbert Hoover. Sirpo founded and conducted the Portland Chamber Orchestra and taught at Lewis and Clark College.

Haimo continued to perform in the Portland area and throughout the US. He also began to study with Ivan Galamian (later the teacher of Itzhak Perlman and many other talents). At the age of 18 Haimo was awarded a Stradivarius violin, in recognition of his work for the Red Cross. It was at this time, in the mid 1940s, that his foster father decided to sell the Otto Sand violin. 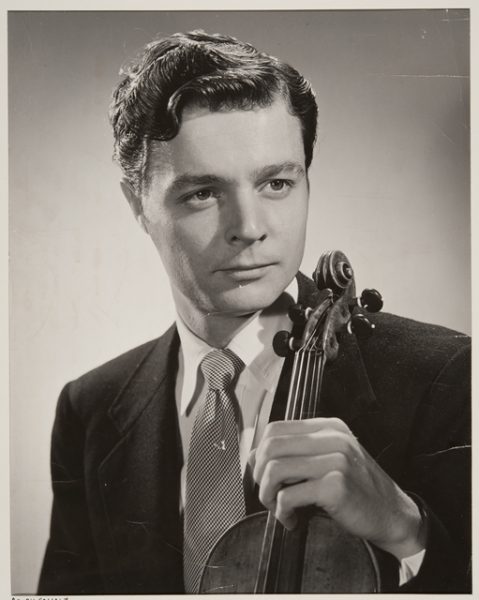 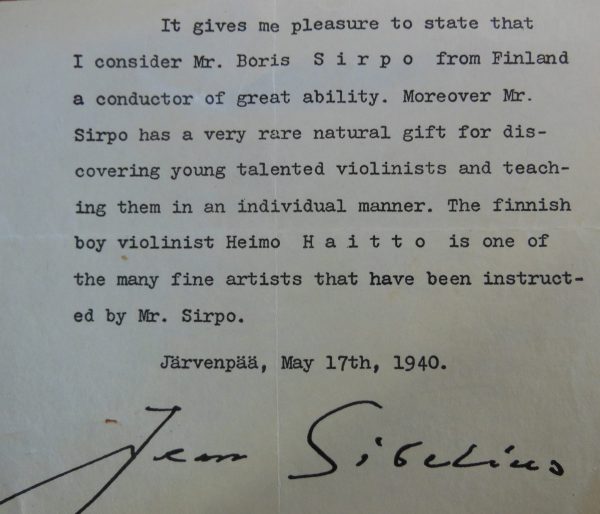 Letter of Reference from Sibelius

In 1945, Haitto became a U.S. citizen, moved to Hollywood and worked with the film industry; he later joined the Los Angeles Philharmonic Orchestra, where he played until 1956. He also played shorter periods as a leader in the Metropolitan Opera orchestra and Hawaii Symphony and lived briefly in Mexico and Switzerland. Later he settled in Finland, where he conducted and taught at conservatory. He spent his last years in Marbella, Spain, and died in 1999.

Robert Harris was one of Boris Sirpo’s violin students in Hood River during the 1940s. In November of 1943, when Robert was 11 years old, Robert’s parents purchased the Otto Sand violin from Sirpo.

He recalls that Boris Sirpo emphasized that the violin had belonged to Haimo, and that since Haimo was no longer using it, Robert should use it, because Sirpo believed him to be a “budding violinist.”

Robert studied with Sirpo for several years, and remembers that he and other students would meet with Sirpo for the lessons in Hood River, in the basement of the Hood River County Library. The large Finnish community in Hood River was well aware that Boris Sirpo was a highly accomplished musician. Sirpo would travel there two days a week to give lessons. Some of his students, including Robert, participated in the Portland Youth Symphony

When Robert went off to college, he left his violin behind with his mother, as during his senior year of high school his interest had turned away from violin, and strongly towards football (much to the chagrin of Mr. Sirpo). 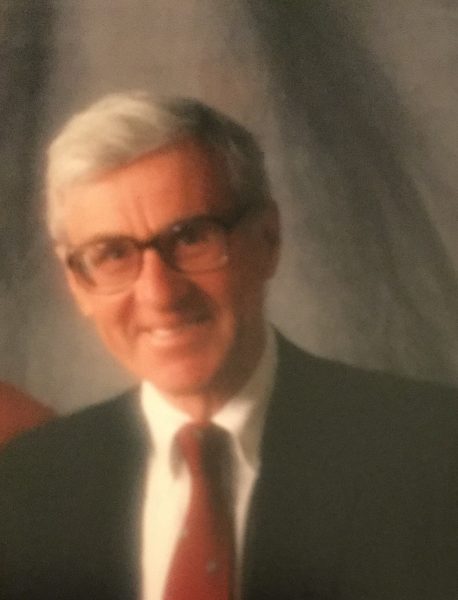 In 1960 Robert moved to the San Francisco Bay Area and brought the violin along. After some time he became curious about the violin. He spent time during the 1970s researching the violin in order to establish its credentials. He corresponded with the daughter of Otto Sand, the widow of Boris Sirpo and the Swedish Consulate, among others.

During the 1980s the instrument was on loan to the San Francisco Conservatory of Music. The El Camino Youth Symphony has been the beneficiary of its loan since 2004. The violin has been played by several Senior Symphony concertmasters.

We are delighted that the occasion of the Sibelius Celebration prompted our interest in researching and sharing the story of the Otto Sand violin.

Many thanks to Robert Harris for his generosity and nearly life-long care and support of the instrument; and also to Tuomas Haitto, the nephew of Haimo Haitto, who is dedicated to preserving the legacy of his uncle.

For more Information about Heimo Haitto:
Visit his Facebook Page