It was our third day in Europe, and all of our wrapped up excitement was finally coming loose. We’d been waiting for this trip for years, and its original postponement due to the pandemic only made it more highly anticipated. And now, finally, after a week of exhausting but extremely informative rehearsals with our wonderful new director Dr. Yun Song Tay, we were finally ready to walk onto the stage of the stunning, beautiful Smetana Hall.

The city is filled with musical venues, regularly dotted through its gorgeous castle-like buildings, but Smetana Hall provided both acoustics and visual aesthetics that I had never seen before. From originally rehearsing in the parking lot of Union Presbyterian Church and performing in the smaller theaters of the Bay Area to performing in one of the world’s most famous musical halls-- this was a mind blowing experience for many of us. To start off, the building is one of the most beautiful pieces of architecture in the city. The pillars that hold it up are covered in intricate engravings and designs, and every portion of the ceiling is covered by beautiful paintings done by Alphonso Mucha. At the very top of the building sits a glass dome, allowing light in and illuminating the grand 1,200 seat hall. In terms of projection, our performance in this hall was as grandiose as it had ever been. The flat wood walls behind the brass allowed its sound to be immediately projected into the audience, and the strings were able to produce a perfectly blended and rich sound that resonated throughout the venue. 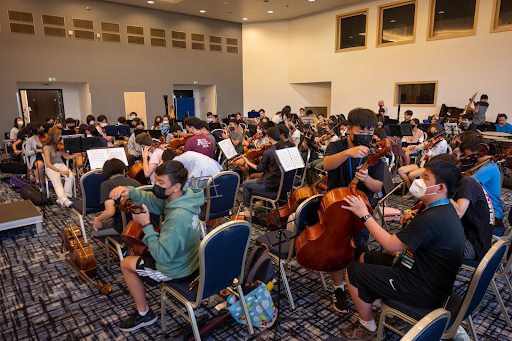 However, we went into our first dress rehearsal for the concert after almost 7 days without practice. We had been on back to back plane rides for days and on bus trips for hours, leaving us no time in the hotel rooms to do anything but sleep. Larger instruments were almost always in transit outside of concerts and rehearsals, meaning that pre-rehearsal warmups were out of the picture. Honestly, I remember being slightly nervous walking into our first rehearsal in Europe. As I took the elevator down to the first floor of the elegant Hotel Pyramidia, on my way to our in-hotel rehearsal room, I began to wonder if we would be able to impress the audiences of Prague. Many of us were sleep deprived and jet lagged, some of us saw that our strings had broken in transit, and others were simply too tired to focus. But once we all began to play, everything that we had practiced and fixed during our pre-travel rehearsals came flooding back to us. Those daily 7 hour rehearsals didn’t go to waste, and after our 2 hours together once again, we were re-energized and ready to perform.

Walking into Smetana Hall, we were excited to show Europe what we could do. As we graced the stage with the beautiful Finlandia, by Jean Sibelius, the depth of our sound came through. The stage itself helped us project, and our dynamics were even more exaggerated by the hall. We then played the moving In Memoriam, by William Grant Still, followed by Bizet’s famous Carmen Suite No. 1. And then came the moment we had been most anticipating. From the first note of Tchaikovsky’s 50 minute 5th symphony to the very last chord we played, our focus was locked in. It was our best performance of the piece, and with our final note, the audience was on their feet. Their applause was seemingly endless, and the sweat that covered all of our faces glistened as we smiled into the audience, both relieved and content with our performance.

Of course, our time in Prague wasn’t limited to concert-specific activities. Most notably for me, we got to visit the Prague Castle, a set of multiple sky-high buildings with stunning architecture. Despite the rain, we were more excited than ever to explore the city, first climbing up to the top of the castle for a view of the entire skyline, and then moving to old Prague square to see the city’s center and shopping hub. For me, the buildings themselves were the most memorable. Grand buildings lined the river and the city, every one shooting up into the sky like a Hogwarts castle. It was the kind of architecture I had only seen in movies. 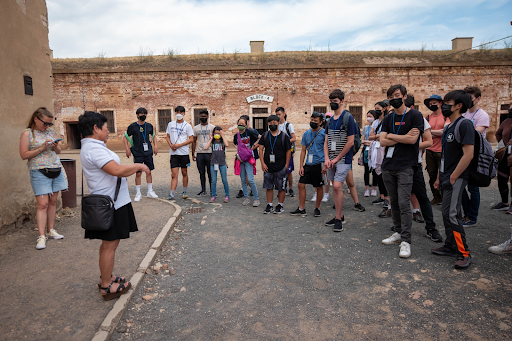 Additionally, the day before our concert, we visited the Terezín concentration camp. Learning about the mass murders that took place in World War II during history class, or even reading Night by Elie Wiesel in English class, had already taught me about the antisemitic, torturous actions that the Nazis engaged in during Hitler’s regime; however, actually being at the spot where many Jewish people were forced to wait for their deaths was heartbreaking. We saw the disturbingly tiny rooms that they were forced into, with no room to sit, lie down, or do anything but stand for days. Our guide also took us through a secret escape passageway in the fortress that ended at the camp’s location of mass murder. At the end of the tour, we watched an unsettling, yet deeply educational, Nazi propaganda film created at the camp to showcase the positive aspects of life there. It was an experience truly unlike any other, and I learned so much more than I would have in the classroom. 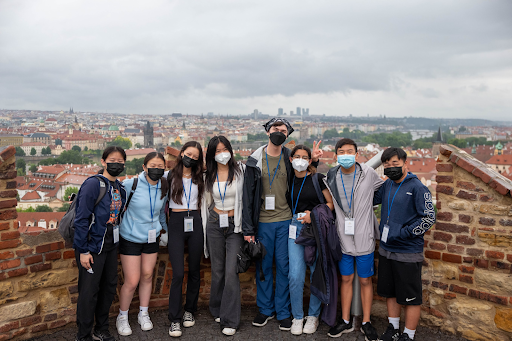 GSYO Students at the top of Prague Castle.

I made quite a few memories in Prague. Looking out over the city with my friends after climbing dozens of flights of stairs was one. Secretly practicing Happy Birthday with the orchestra to surprise our director Seth Ducey was another. Seeing him fall on the floor laughing as we played for him in Smetana Hall was yet another. Even the pillow fights and movie nights in our hotel rooms created more memories that I’ll hold with me forever.

With the trip now complete, I can definitely say that I’m so glad to have been given this opportunity. Not only has my love for music grown exponentially, but I got the chance to visit countries and make memories that I never would have otherwise had the chance to. Thank you GSYO for taking us on this trip and allowing me to make some of my closest friends! We love Prague!

Arushi Agarwal is a senior at Mission San Jose High School in Fremont California who has been playing the cello for eight years. This will be her second year in Golden State Youth Orchestra’s Senior Symphony and her third year in the GSYO program. Alongside pursuing her passion in classical music, Arushi enjoys dancing and cooking.