The days of summer were quickly approaching, which meant that Tour (2 years in the making!!!!) was underway. In preparation for the much-anticipated tour, we gathered at our usual spot—the Union Presbyterian Church of Los Altos—for five days of intense rehearsals. Main takeaway? Performing is not for the light-hearted.

Monday morning, I woke up to a blaring alarm at 9 am, a harsh wake-up call (literally) to the foolish idea that I would be able to sleep in during summer. I quickly got ready, packed my bag, and met Anika (a fellow flute player) at my front door. We planned to carpool to rehearsal together. We arrived early and set up camp while catching up with the other flutists. Shortly after, Dr. Tay, our new Music Director and Conductor, introduced himself, and our day began. 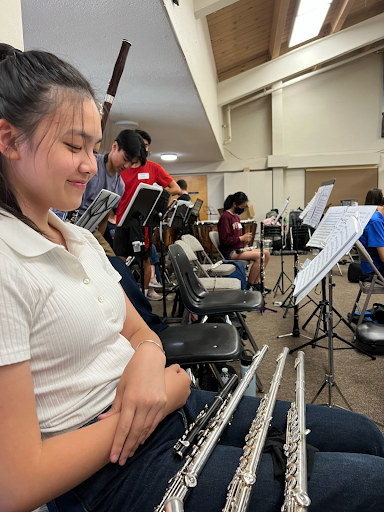 Minseo, mom of 3 flutes while the rest of the section is on bathroom break.

After a run-through of Sibelius (Finlandia) and Grant Still (In Memoriam), I felt pretty good about our playing, but that was based on outdated standards. I quickly learned that Tour required a much more rigorous and expressive level of playing. Sections in the pieces that I previously thought could be glossed over were held under the utmost scrutiny, rehearsed over and over again until I felt like I could hear it in my sleep. There was nowhere to hide; it seemed like Dr. Tay heard every fumble in my fingers, misdirected breath, and incorrect articulation. I marveled at his memory; he was able to recall small mistakes deep into the piece and conduct each of us to the highest degree. By noon, he knew nearly all of our names and what we each needed to work on the most.

Lunchtime came like a much-needed breath of fresh air, and I took this chance to take my mind off the music and talk to friends. We sat at the picnic table underneath the tree and talked about our excitement about the tour, what we planned to bring, and how our summer was going. We Google-mapped the places that we would be staying at and became excited at the thought of swimming at the hotels, going to nearby restaurants, and exploring the towns. Many of us had never been to Europe before, and these countries: Germany, Czech Republic, and Austria were our dream destinations. Jocylin shared her mom’s homemade bread and brie cheese, rekindling my love for both of those foods. I vowed to eat as much cheese in Europe as I possibly could.

In the afternoon, we tackled the giant beast known as the Tchaikovsky 5th Symphony. For the flutes, it was a lot of sitting and counting. But this was not easy. A single slip of the mind was the risk of a missed entrance or awkward reentrance. Tchaikovsky’s style was grand, but also intricate; there were broad strokes of melody, but also delicate runs of scales or arpeggios. Each phrase needed as much fervor as it did attention to detail. Over the course of the week, I truly learned what it means to play a Tchaikovsky symphony. It was a real workout.

By the end of the day, I was exhausted. But there was one more thing: Mambo. Seemingly innocuous at first glance, this piece was a beast of its own. Our first run-through was like a dilapidated train that kept on going until it collapsed, spontaneously caught fire, and burned to the ground. The rhythm required extreme concentration, and I remember distinctly at the end of the first rehearsal, Dr. Tay said, “I’m not concerned right now, but I will be if this piece sounds the same tomorrow.” We were instructed to go home and practice hard. I went home and took a fat nap.

The next day, I woke up thinking, “How am I going to get through four more days of this?” But I got through that day. And the next day passed, and the day after that. Finally, I was starting to see the finish line. Tour rehearsal week was the most challenging, but simultaneously rewarding orchestral experience I’ve ever had. In a week’s time, I was able to nearly perfect my technique across all the repertoire, bond with my section, as well as some players from other sections, and truly learn what it means to be a musician. I learned that playing in an orchestra was not about the individual, but about adding to the sum of all parts. “The whole is greater than the sum of its parts” was etched in my brain. 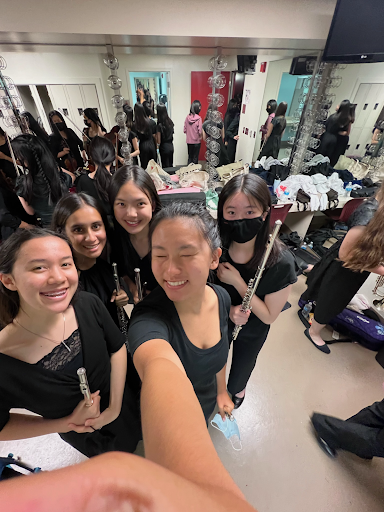 Over the course of those five days, we familiarized ourselves with almost every corner of the music. When I sat back and actually listened to the orchestra on the last day, I couldn’t believe this was the same group as a few days ago. Our blend, intonation, and musicality was otherworldly (maybe that’s an exaggeration, but a lot better than the beginning of the week, to say the least). We were ready for the Bon Voyage concert and tour. For some reason, this concert felt different from all others. It was so much more meaningful and gratifying than previous ones, simply because of how much hard work we had poured into it. We each put our all into the music, and we all felt it, including Dr. Tay, evidently from the beads of sweat on his forehead. Our hard work had paid off. We were ready to take Europe by storm.

Christine Zhao is a rising junior at The Nueva School. She has been playing the flute for 5 years and is currently studying with Isabelle Chapuis. She is also a flute teacher herself, teaching elementary to middle school-aged students. Outside of music, she is the editor-in-chief of her school’s yearbook and an avid swimmer. She enjoys spending time with her dog, reading, and taking photos on her thrifted film camera.